Pentagon City is a neighborhood of Arlington County, Virginia, roughly bounded by Interstate 395 to the north and west, Route 1 to the east, and 18th Street S. to the south. Gorove Slade has helped advance several projects in the Pentagon City area, including:

The Bartlett (MetPark 4/5)
Gorove Slade was the transportation consultant supporting the Vornado/Charles E. Smith development team throughout the project design and 4.1 approval process. The Bartlett is an apartment community with 700 units and 45,000 square-feet of amenities, including a Whole Foods grocery store and other neighborhood retail.
Gorove Slade:

PenPlace
Gorove Slade worked with developer Vornado/Charles E. Smith on the rezoning and entitlement process to develop ﬁve new buildings containing office, hotel and retail space on a currently vacant parcel of land. There was a significant amount of community involvement for this project given its size, scope and the proposed uses planned for the site.

As part of this project, and in coordination with an adjacent project to the south, a missing segment of 12th Street was added to the roadway network to create an additional east-west link between S. Fern Street and S. Eads Street. Additionally, a transit stop will be located on the southeastern corner of the site along 12th Street.

Gorove Slade has assisted the team with the roadway planning for the new section of 12th Street, assisted with the multi-modal transportation planning for this site given its proximity to Metro and enhanced transit routes, prepared a detailed traffic impact analysis based on requirements of County and State regulations, attended Long Range Planning Committee (LRPC) meetings, prepared a Transportation Management Plan framework to limit the number of single-occupant vehicles traveling to the site, and worked with the project team on overall site circulation and parking garage access.

Metropolitan Park 6
We again supported the Vornado team throughout the project design and the 4.1 approval process. This project will be built on the southwest quadrant of the S. Eads Street and 13th Street intersection in former industrial space. The approved project consists of approximately 570 condominium and apartment units and 10,000 square feet of neighborhood retail. We prepared the traffic study for this project and assisted the team with presentations to the Transportation Commission and SPRC

“We have lost count of the number of successful projects we’ve done with Chris and Gorove Slade. Their broad base of knowledge and experience makes them our “go to” consultant on all matters of traffic and parking. It is uncanny how many times they have produced effective common-sense solutions to issues that others thought required complex expensive answers. In situations which can often be contentious, they have a way of making all parties feel comfortable and confident. They are the first we think of when it comes to traffic and that is not likely to change.” 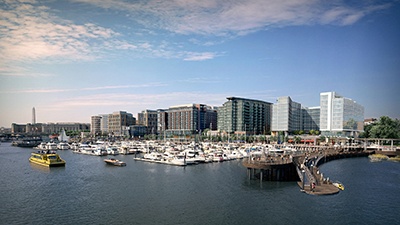 The Wharf is a mixed-use project spanning several blocks along the Southwest Waterfront and includes office, residential, retail, hotel and cultural… END_OF_DOCUMENT_TOKEN_TO_BE_REPLACED