As a result of the 2005 Base Realignment and Closure (BRAC) Final Report to the President, the Walter Reed Army Medical Center (WRAMC) was closed in 2011 after the relocation of patient care and other services to other sites. The now surplus land was designated for use by both the Government of the District of Columbia and the Federal Government. Gorove Slade has completed projects on behalf of both the DC government and the federal government related to the re-use of the 100-acre parcel of land.

The District of Columbia was designated as the Local Redevelopment Authority (LRA) and was required to complete a Reuse Plan in order to acquire the surplus property. Gorove Slade prepared an existing transportation conditions assessment that was incorporated into the Reuse Plan. The assessment reviewed regional and local vehicular access to the site, transit services, site access and circulation, and pedestrian and bicycle access and circulation. Gorove Slade also completed a capacity analysis of the roadway network surrounding the site and provided an assessment of the opportunities and constraints affecting the future development of the parcel.

Gorove Slade completed a Transportation Impact Study supporting the US Department of State’s plans to adapt its portion of the WRAMC site into a Foreign Missions Center. US DoS intends to lease lots to foreign governments for the purpose of building and operating their chanceries. The transportation impact study reviewed existing transportation conditions – vehicular, bicycle, pedestrian, transit – and included a roadway capacity analysis.

“The quality of work, attention to detail, and promptness of Gorove Slade’s work is frankly unmatched on our team of more than 45 consultants, architects, and designers.” 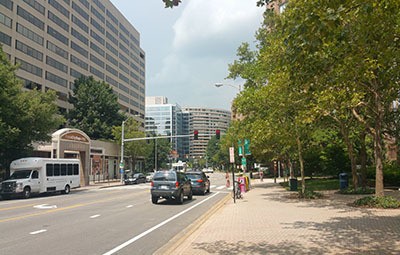